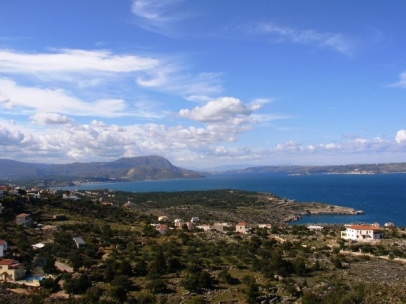 Just a few minutes’ drive from Plaka is the village of Kokkino Chorio. Kokkino Chorio is popular because of its location and the fantastic views to both mountains and the sea.

Follow the signs to Kambia - right turn up the hill as you leave Plaka and follow the road as it sweeps up the hill- or go via the coast road and turn right up the hill at the end of the road to enter the village.

Dependant on which guide book you choose to read, this is because:-

Approximately 200 permanent residents live there. In the old and original part of the village there are narrow streets with white washed stone houses.

On the outskirts are newer houses whose owners have helped bring a mini revival to Kokkino Chorio and the neighbouring villages over the last few years. There is a well stocked mini market which has opened in the last couple of years to support the old kafenion and cafe that were already there.

The excellent ‘Yannis taverna’ at the side of the village children’s basket ball court / football nets is now open all year round. In the summer, he has ‘music nights’ when traditional music is played outside until the early hours. Its outside in teh summer and since the music is unlikely to start before 11 pm, it’s also unlikely to finish before 2 or 3 am, but no one complains.

The reason that many people have moved here and built or renovated houses in this particular village is the stunning sea and mountain views that abound in this area. This village was used as a location for the 1964 film Zorba the Greek and many locals from Kokkino Chorio and surrounding villages featured in this classic film.

Kokkino Chorio sits on the slopes in quite a hilly area. If you leave the village square and proceed to the highest points above the village you will come – eventually – to the church of St. George / Agios Giorgos. In common with a lot of Greek churches is only used on the day of its patron Saint. In this case it’s on April 23rd St George’s day – when lots of people can be seen, mainly outside the church as it’s so small.

Here, during World War 2, the Germans used forced local labour from Kokkino Chorio and surrounding villages to expand an already existing cave whose stone corridors now go deep in to the hillside (take a torch!) They also erected houses at the side of the entrance for the officers and staff who were based there.

This much enlarged cave was used like a safe underground shelter, storage area and more - to store supplies, generate a little electricity and protect the soldiers who were based there.

The remains of the many gun emplacements show that this was a very important and strategic base for the Germans. It allowed them to monitor and control all ships entering or leaving Soda bay – the largest natural harbour in the Mediterranean.

Kokkino Chorio – of course has more than one church. It wouldn’t be a Greek village if it didn’t. St Katherine’s church is used on November 25th. The large church of St. Haralambos opposite Yannis taverna and the basketball court is the one that is used on a weekly basis.

On the outskirts of the village on the corner of the road to Drapanos, you cannot fail to notice the mountains of empty bottles outside a ramshackle building. This is the famous ‘glass factory’ where the recycled glass is used to create – traditionally by hand - quite lovely glass vases / lamp shades and more. You can go inside, watch the glass being blown and purchase as you see fit.

The coast line around Kokkino Chorio is also a great place to visit. There are caves in a number of places and what I believe is officially known as ‘Koutalas cove’ is a great place to visit. Go down the hill from the village and head towards the sea. After a kilometre or so you will see the road to the tiny headland where there is some sort of radio antenna used by the Greek Navy. Before you reach the antenna, take the left turn down to the coast. You will find yourself looking down to a tiny bay with a small beach. Koutalas cove is usually empty during the week and it’s a great place to swim and snorkel. You can drive down the windy road to the beach. If you’re very brave you can climb around the rocks and jump the 15 or so metres in to the sea. Failing that, just swim. It’s a beautiful place.

One day I stood, looking down at the beach and decided to stroll passed the turn off that goes down to the beach. I followed a little path and came to a set of steps built in to the rocks and descending to the sea. Rightly or wrongly – there was no one around – I made my way down the steps. When I eventually reached the rocky coast below, I was astounded; there was a fantastic cave at the side of a landing area adjacent to a ridiculously clear blue sea. Beautiful and mysterious, I realised that this was obviously a place used long ago by smugglers. Alternatively it was a safe place from World War 2 that was used to hide British soldiers or partisans before they were whisked away on dinghies in the middle of the night to a submarine waiting in Souda Bay.

I stayed there for a while absorbing the atmosphere before climbing the steps back to the top. At the top there was an old Greek guy who had emerged from a gate to the house nearby. I told him about me ‘finding’ the steps and was about to say more when he interrupted me. ‘Yes, I built them in the nineties’ he said, ‘I use them because it’s easier to fish from down there – rather than from the top of the rocks’.

‘Of course’ I said, ‘have a nice day’. Deflated? At least I didn’t tell him in detail what I had ‘found’.