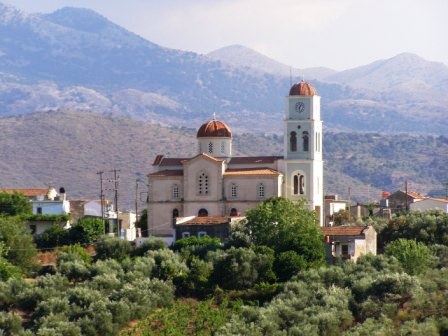 The two Kalamitsi villages are situated a few kilometres inland from Giorgioupolis on the Vamos road. A small community of about 350 permanent residents live in what I was told was a 'divided village' about 8 kilometres from Vamos and the health centre. The large village of Vrisses is also only 5 minutes away.

Coming from Giorgioupolis, you enter Kalamitsi Amygdali first and on the left as you drive through you will see the tiny silk making co-operative which is run by the women of the village.

Kalamitsi Alexandrou, a little further down the road is another old and well-preserved village with narrow streets, the large, modern, cross-shaped and domed church of Agia Triada and impressively constructed underground reservoir "Softas" dating from the Turkish occupation.

Between the two villages are two tavernas a kafenion and a mini-market. The views from ‘both Kalamitsis’ to the White Mountains beyond the green valley below are absolutely breathtaking. There is also a kafenion in the square at Kalamitsis Alexandrou.

Either of the Kalamitsis is ideal for someone wanting to become part of a traditional and peaceful community having easy access to nearby beaches at Giorgioupolis and the many tavernas at Vrisses and Vamos.

Visitors often ask those of us who live here ‘what do you miss most about the UK?’ The real answer isn’t ‘Marmite’ or ‘bacon sandwiches’ it is culture. Whatever ‘culture’ means to you – live music, the theatre, art galleries, a good local pub, cinema, ballet, … whatever it is, it isn’t here as you know it. In some cases there are close approximations but for example live Greek music in most of its forms doesn’t ‘do it’ for me and many other ‘incomers’ – certainly after the first twenty minutes.

However, in addition to just eating, drinking and sunbathing (it tends to gets a bit boring after every day for the first five years) it is possible to ‘get some culture’ in this area.

Kalamitsi Amygdali is the home of Phil and Francesca Harrison who, with a number of like minded souls are founders of the Kalamitsi Arts Group (or to see the facebook version KAG). Their ‘raison d’être’ is ‘the organisation of creative events in Western Crete’. They succeed in their aim and the group are responsible for many good ‘happenings’ in the area.

For their sins, they also help organise the annual Vamos Arts Week which is a week long series of events in the area to cater for all tastes – exhibitions, live music with guest artists and much more – see the link to their estival web site above.

Francesca is an artist and sells paintings and cards and more. So see some of her works visit Francescas' area in the KAG web site.

Last but not least – he leads a full life – Phil is one half of ‘Big Fish,’ a band who play a lot of live music locally and have released their own CDs. Visit Phils’ web site for more information about Big Fish and other things that Phil is currently doing.

PS: The ‘other half’ of Big Fish is John Mansell - and he lives in Xirosterni.