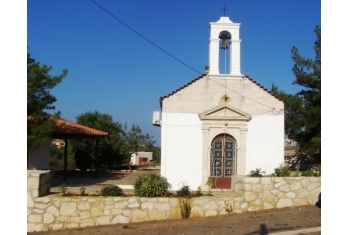 As you climb out of Kokkino Chorio heading towards Kefalas, the first place you hit – right on top of the hill that forms part of Cape Drapano– is the village of Drapanos. Slowly expanding, its still quite a traditional village with an area on the outskirts which is essentially ‘new build’. The village has great mountain views everywhere and in some areas fabulous sea views down over Souda Bay.

The 'new' area – some 9/10 or more years old – contains North Europeans who have helped breathe some life back in to and sustain the village. Because of this, and like lots of other places, the ‘newcomers’ are welcomed by the villagers.

Now, there are two good tavernas in the village with full menus in the summer and they are also open in the winter. There is also a small village shop selling groceries.

Drapanos is at the forefront of a project supported by WWF (world wildlife fund) Greece and, I believe the EU. A lady called Sharon Jackson is currently heading a project for E∑A (the European Sustainability Academy) 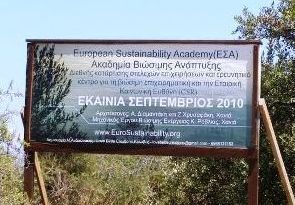 . She has built a ‘fully sustainable’ building which is used by both herself and her clients - and also by the local community. Rather than talk to senior exutives from international companies about their ecological responsibilities / carbon footprints etc. in 5 star Hotel lecture rooms, Sharon had the idea to show them what low impact buildings actually are - and show them what can be done.

Residential conferences are held at this international management and research centre . The building has been constructed in a very old and traditional manner – using elements of mud and straw as part of the contruction methodology - and it is now 'open'! The plot is on the outskirts of the village and the building is also used by the villagers to provide them with another amenity.

Drapanos is about 8/9 minutes drive to the beach at Almyrida. Alternatively, the sea at Ombraglios is the same distance away. Many of the newer properties either have their own pool or have access to a shared pool.