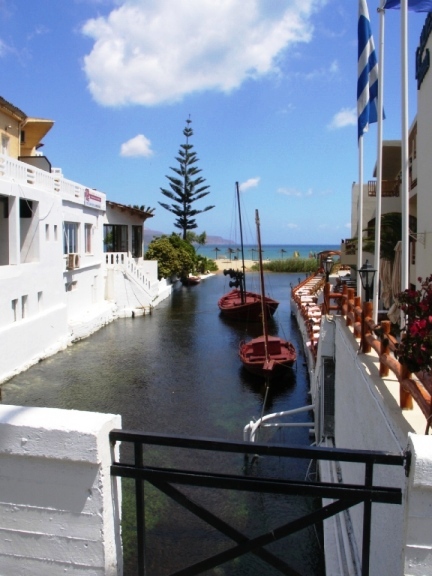 Kalyves has a large school which caters very well for the children of the foreign nationals living in the area and there are also a number of state offices in the village.It is also a popular tourist resort that has maintained its Cretan character. It is very convenient for the highway and is approximately 20km from Chania. The town runs alongside the sea for a couple of kilometres with the beach at the front and some low hills behind.

There is a tiny picturesque harbour at the East end of the town with a kantina on the beach nearby. Running alongside the golden sandy beach which starts at the side of the harbour are some really good tavernas and cafes.

There are some beautiful old stone houses at the side of the main street through Kalyves, many of them whitewashed and renovated. In the narrow alleyways running off this, there are also old stone houses – both renovated and requiring renovation.

There are also many shops and tavernas on this road. It is a busy little town with a 3 large supermarkets, 2 banks, cash machines, bookshops, clothes / shoe shops , really good fruit and vegetable shops, 3 butchers, 2 pharmacies and a laundry. There is also a ‘wine merchant’ with some great wines. This is owned by ‘Stavros the vine’ who does occasional wine tasting and really knows his chosen subject. He’s also a traditional barrel maker – should you want a barrel making. Its also one of the very few places I know where one can buy a bottle of Port.

On the way out of the village – going West to Kalami – there is a sign and arrow to ‘Koumos’. This place is worth a visit. It’s one man’s folly. It is a collection of buildings – including a taverna and a chapel with a domed roof – all built from local small misshapen stones. Why did I describe it as a folly? Because this eclectic mix of buildings made from small rocks was all built by one man over a period of 10 years.

There are mosaics on the paths; whilst walls display images of fish, snakes and various animals. There are also stone tables and chairs. If you just want to wander around, take photographs or just be amazed, just have a drink after (there are some chairs other than the stone ones) as there is no admission charge. When I was last there, we sat on a table next to a couple of ostriches and a llama – quite surreal as these weren’t made out of stone

If you carry on going west out of Kalyves, just before you reach Kalami village, there is another beach – Kyani Akti – not signposted (of course). This is a great sandy beach hidden behind some fields of bamboo and is very quiet throughout the year.

The road that runs through the town is badly congested in the summer as it is very narrow. Combined with the Cretan desire to park directly outside the shops they are visiting and the occasional coaches bringing tourists, the road through Kalyves can easily get blocked for a short while.

It’s best to sit and watch this spectacle and be entertained whilst sitting under the massive tree shading the tables at the cafe in the middle of the village. It is located in the square at the side of the beautiful church dominating the centre of the village.

Kalyves patron saint is Agios Paraskevi and the Saints’ day (26th July), the annual carnival in April and other festivals are celebrated to excess in Kalyves with crowds lining the main street as processions trail through.

A small river flows through Kalyves and spills in to sea after passing under a bridge at the side of the Agricultural bank in the heart of the town. In a car you’ll see nothing. Get out and look. The photographs below don’t do it justice.

Last but not least, on the way out of Kalyves going to the highway, there is a large building with a large sign above it displaying the name ‘Piscine Ideales’. This is more than a shop. Bazaar probably doesn’t do it justice either. ‘Drop in centre’ comes close. It is a cavernous place full of ‘stuff’. It is owned and run by Dimitri and his business partner Andreas. Two very nice people.

In theory they ‘sell’ swimming pools, associated equipment and chemicals. Whilst they do some of this on behalf of a French company (hence the sign ‘Piscine Ideale’ of course), they do so much more. Their 'specialist subject' is swimmimg pools, however, they offer a lot more than this. The place is full of great furniture for the inside of your house, BBQs, Jacuzzis, outdoor furniture and it’s also a great place for conversation! Don’t go in if you‘ve only got a few minutes or have an urgent appointment quite soon. Chill – you’re in Crete!

What I mean is that you'll be made very welcome by both of them and their team, they'll be happy to discuss all your needs, any problems .... and anything else on your mind! I believe they know more about the design, construction and maintenance of all types of swimming pools than anyone else in the area. Testimony to this is that a reasonable amount of their business consists of repairs to pools built by 'others'. Believe me, just because someone can pour concrete and lay tiles, it doesn't necessarily mean they can build a good swimming pool. Better that you go to them from the beginning.

I first met Dimitri more than 9 years ago before he had ‘the shop’. He is a lovely man with a great interest in sailing and even more so in music, although raising a small family has no doubt pushed that in to the background.

In the eighties, Dimitri was producing a small magazine in Athens and running what I’ve seen described on the Internet as a ‘legendary record shop’. He was also responsible for being one of the very first to satisfy the new Greek taste for Rock and Blues bands. He promoted concerts featuring some great British rock and blues bands via a small company ‘Happening Promotions’.

Andreas – the ‘other half’ of the business – was ‘something’ in the fashion industry in London before he decided to come here with his beautiful wife Jude (photographer, designer, make-up artist and more) and change his life style. Andreas plays a great solo acoustic guitar and sings. If you ever go to any local gigs and he’s there, encourage him to pick up a guitar, you won’t be disappointed.

Having said all that peripheral ‘stuff’, Dimitri built me a great Piscine Ideale pool 9 years ago – it’s still like new – and he also did a fantastic job landscaping the garden. As you gathered, I approve.