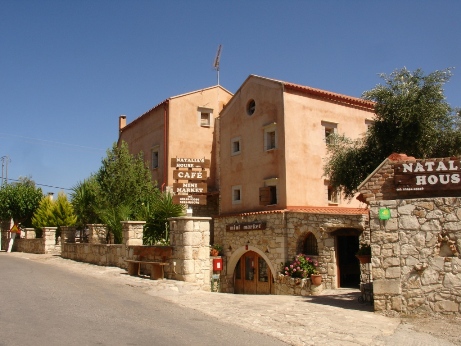 As you travel down the road from Vamos to Kalyves there is a right turn signposted Gavalohori. Take this and turn on the next left to signposted ‘Douliana – or even Ntouliana (as nt = d in the Greek language).

Slowly proceed down this narrow road in to the village itself.  Now this is a sleepy village! The village has some beautiful stone houses and is very pretty. There are fantastic mountain views from most places and you can see the sea from some areas of the village.

There is a selection of new houses in Douliana – some prefabricated homes (they are better than they sound) and a larger development constructed by an American think., this is a very nice complex.  There are also some wonderful older and established houses in and around the village.

In reality it is a great little village convenient for lots of other nearby villages and beaches even Almyrida is only a 6 minutes drive away and Gavalohori, Vamos and kalyves are nearer.

There are about 90 permanent residents. There is also a small shop, a great kafenion and a wonderful restaurant / taverna.  The owners of the Ivgoritis (Ιβγοριτηs) taverna are  Nikos and Bridgette. Bridgette is of  Austrian descent having lived in the area for many years and together with Nikos, raised two sons. I first came across them in the Medusa restaurant in Kalyves in the late nineties.

But ….. just occasionally, (like a curry) you crave a good steak. Bridgette used to do the best fillet steak I’ve had anywhere! And, as a result, I used to visit the Medusa once a week. Tragically, in (about) 2004 Nikos & Bridgette decided to retire. Although deeply wounded, even I didn’t take it personally and managed to carry on.

Last year, I discovered (Internet, where else) that, like all great rock bands they had reformed and were in business again. Bridgette recognised me when I walked in (why wouldn’t she, I contributed to her retirement fund the first time) – smiling, she said ‘Pepper Steak  and some  of my cheesecake’. I think I shed a tear. The food was just as good as I had remembered - steak and to follow, raki and some lovely pancakes, a gift from 'the house'.

Having revealed all that – they have a great menu (not just steak) with lots of traditional Greek dishes and other specials.  Go there.