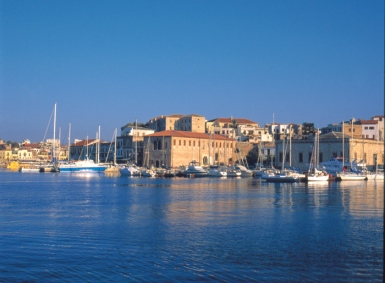 There really is SO much to say about Chania. It’s one of the reasons we live here!

The truth is, you must go! Its beautiful, photogenic and you will enjoy life in the Old Town or just sit by the harbour and watch the world go by.

Ignore the usual Cretan mess on the way in commercial and residential mixed together whatever. Travel down to the area around the harbour and just wander around the place its beautiful. The atmosphere is reminiscent of old Italian cities. Relatively little has been restored but the air of decadence, old beauty, class and style is wonderful. The changing light in the area means its a completely different atmosphere from the morning to the late afternoon and through the night. Night? Many of the more interesting bars (and some restaurants) don’t open until well after the average North European has eaten and is thinking about bed.

Because of its history, there are cathedrals, synagogues and mosques in the Old Town. There are SO many places to see you should try and go there a few times to understand the enormity of the beauty, you will find something / somewhere new every time you go.

Either go to the other side of the harbour beyond the mosque or probably better still, try some of the restaurants in the little narrow streets behind the waterfront. We have our favourite places of course . At the moment we can’t put everything on the web site so restaurant reviews are at the moment low priority as we’re actually trying to sell houses!

SO.. if you want some recommendations telephone us, email us or just call in.

NEARLY LAST - BUT NOT LEAST THE VIDEO

As you’ve already realised, it’s difficult to give an impression of Chania in just words. When I understood this I thought about a video to try and give you a better understanding. The truth is, we can’t afford to do this! However, I came across a web site which had done just that. The web site below is a ‘Hotel Travel Guide for your holidays’. Have a look. It seems to be a good site and is worth browsing. Below is the link just for the video. The first part is based in Chania (harbour, old town, market, leather lane etc) and the latter part is a tour of some of the places around Chania and to the South of the Chania prefecture.

On the site there is a series of labelled photographs of Chania which might help you if you don’t recognise some of the images of the places in the video.

Last but not least, there is a link to Greekhotels guide / brochure to Chania. Its a long PDF document! Spend some time on their web - site please its very good.

The official population of the municipal area at the last census was 55,838 but around 120,000 people live in the greater area of Chania which includes Apokoronas. With 4,248.1 inhabitants/km², the municipality is the most densely populated in Greece outside the Athens and Thessaloniki metropolitan areas.

To give you a flavour.

The city of Chania is built on the area of Minoan Kidonia, at the end of the gulf between the Akrotiri and Onicha peninsulas. It was the former capital city of Crete (from 1847 until 1972). Nowadays, it is the second largest city of Crete after Heraklion and capital of its prefecture. Chania includes the old and new city. There are different architectural styles here presenting the historical route of the city. After Arabs and Byzantines it was conquered by Venetians in 1252 and was given to Turks in 1669, later it was annexed to the rest of the Greek State on December 1913 under the administration of Eleftherios Venizelos and King Konstantinos the 1st. The old town is an integral settlement with visible boundaries set by the Venetian walls surrounding it.

This gives you a flavour for how Chania has become what it is today. If you want to read more, click on this link about Chania from the Greek Tourist board. Beware it’s a little ‘dry’!

Or, if you are thinking of entering the ‘Mastermind’ quiz and your specialist subject is going to be Chania, try this link to Chania from Wikipedia.