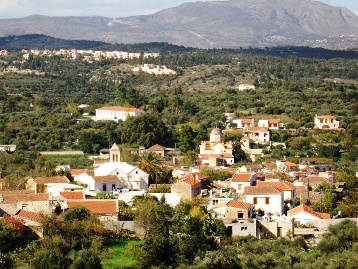 Gavalohori is approximately 2 kilometres inland from Almyrida and 3 kilometres from Vamos. Gavalohori is a large old village which is officially protected because of its long history and importance in the surrounding area.

There are some 600 permanent residents in Gavalohori which – because of its size – is a ‘living’ village with amenities available all year round.

History tells us that it is named after the Byzantine family Gavalodon who lived there about 1200AD! There are buildings still remaining from this era and from the Venetian and Turkish occupations which followed. Artifacts from these times and the earlier Minoan and Neolithic times are housed in the Historical and Folklore Museum down a side street from the lovely square.

Gavalohori sits in a small valley surrounded by hills which are clad with pine trees. Driving along the road from Almyrida into the village always reminds me of being in the Austrian Tyrol - particularly when the mountains are topped with snow.

The village square is never empty! You can sit in Monikas kafenion/taverna (actually called Gavalianos) next to the war memorial, sip a drink in the shade of the overhanging trees / vines and watch the world go by. Order lunch or go back in the evening when you have more time and try the magnificent food – ordered from the blackboard brought to the table. The villagers will be sat there alongside you – particularly in the evening. the garden at the rear where most of the evening meals are served is a lovely secluded and very lush space to relax and enjoy good Greek food.

Opposite the kafenion there is a Womens Co-operative selling local handicrafts – pottery, lacework, herbs, honey and more.

Down by the side of the square on the way to the museum there is another taverna/kafenion which is well worth a visit.

There are a number of other tavernas in Gavalohori, I’ve tried them all and never had a bad meal.

It is a living village so there is also a bakery, a couple of cafes, souvlaki shop, confectioners and a couple of minimarkets. There are a number of North Europeans living in Gavalohori. Some live on the higher outskirts of the village with views over Souda bay and to the mountains. There are also some living in stone renovations in the village. Nearly all of them have tried to integrate and become part of this great little community.

The celebrations in Gavalohori at Easter and the other festivals are not to be missed. Fireworks, gunfire, wine, food and music – its all going to be there. The picture of the church below is the location for the start of the Easter celebrations. At midnight on Easter Saturday, the faithful emerge from the church carrying candles lit with the 'holy flame'. They are calling 'Christos Anesti' (Christ has risen). The dark and damaged patch of tarmac in the photograph is where the bonfire is lit by the flames from the candles - brought out by 'the faithful' from inside the church - at midnight. (Yes. The bonfire is sat on the tarmac). Then, as the flames rise, they burn the effigy of Judas Escariot that sits on top of the bonfire. Now, the celebrations start!

Finally, it’s impossible to mention Gavalohori without acknowledging the vast number of churches – well in to double figures – that serve a permanent population of 600!

The larger ones and some of the smaller ones are beautiful – have a wander around when you visit Gavalohori. There are also small ‘family’ churches – as there are in many Cretan villages. These are small churches built (I presume) by one individual to demonstrate their faith in God. The wider family (second cousins are regarded as very close in Crete) will use the church for weddings, christenings and funerals.

I am aware of one that has been very slowly being built on a small hill at the side of the road between Plaka and Kokkino Chorio. After 10 years, its ‘nearly there’, another 5 and it might be finished.

I once asked a Greek acquaintance – at the christening of his son at family church in Gavalohori – what sort of individuals take it upon themselves to build a 'private' church? ‘Those with most to fear, my friend’ was the instant reply.